The history of Lister is very interesting

In the mid 1970s tenants fought to save their homes, lobbyied to preserve their heritage housing, and worked hard to provide a safe environment. Later in the mid 1980s Lister fought to save and renovate an adjacent set of tenements. This process continues to this day with open dialogue with nearby projects and building developments. Both tenants and committee remain vigilant to protect our beloved environment and the security of our members and the wider community.

There is a Lister History Group, comprising tenants and others, who research local history and meet monthly at Lister. 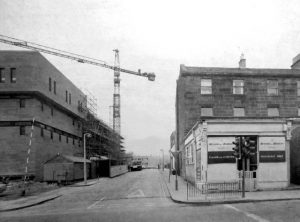 The corner of Lauriston Place looking down Keir Street c1971. Note shop frontages on right and Hunter Building being built

The Main Site of Lister – the area of mostly Georgian tenements bounded by Heriot Place, Keir Street and Lauriston Place – had deteriorated since being built in 1816-1824. In the 1950s and 1960s, a small private trust – the Lister Trust (to commemorate Joseph Lister – the founder of antiseptic surgery) bought up more and more of the properties.

The Lister Trust found it now owned many old flats but did not have the resources to do anything with them/the site. They gave the whole Trust to be managed by Edinburgh University, and looked to the Uni to use them to provide a memorial to Joseph Lister.

The University bought up the remaining properties in the site that the Trust didn’t own and sought to solve the problem – with a wrecking ball and bulldozer. They applied to the Council, in the mid-1970s, to get the site re-zoned for educational use and the flats knocked down. However the people living here understandably were not prepared to stand idly by. Some were long-standing residents, others were students, post-grads and lecturers billeted here in the run-down flats.

A near-miss potential tragedy of a Lister child in a nearby derelict site galvanised parents and other occupants to lobby the Council and Councillors to stop the loss of housing that was basically quite solid and repairable. The University had gradually lost a lot of support from ordinary citizens, as they demolished much of George Square and other areas to fuel their property development spree.

The day was saved by the Councillors blocking the change of use and the tenants did not rest of their laurels. They wished to get the housing improved so the tenants association worked with Edinvar Housing Association to apply for government funding. The 1974 Housing Act allowed the Government to channel significant funds to the newly growing housing association movement. Lister realised it could take control of its destiny, and formed a housing co-operative, working with Edinvar to get the properties rehabilitated.

The improvements took place between 1978 and 1982 and the new tenement at 16-20 Heriot Place was built too. The project won a Saltire award and a various commendations.
Money was tight however and whilst there were major improvements, some aspects could not be tackled – some floors had been repaired but still sloped at strange angles due to past subsidence.

Stopping The New Site From Being Flattened

A new challenge came in the mid-1980s. An adjacent U-shaped tenement across the road, on the south side of Lauriston Place, on the Royal Infirmary of Edinburgh site was proposed for demolition by the RIE. Their ambitions for the whole RIE site were very expensive and they had some debt, so the actual proposal that went to the Council was for the Georgian tenements on the south side of Lauriston Place to be demolished – and made into a car park!

The conservation lobby in Edinburgh was in uproar and by this time people knew that there was a lot of sound housing that had been demolished in central/south Edinburgh. The proposals went to a Public Inquiry and the RIE NHS lost. People looked to Lister, as an adjacent success story, to take over and renovate the buildings for social housing. After some delays, the buildings were finally sold to Lister and the renovation plans commenced.

The Lister New Site project ran from 1990-92 and cost £5.5m – the highest value housing project in Scotland at the time to create 50 flats. This time the renovation was more comprehensive – the outside shell was refurbished and the inside is all ‘New-Build’ due to the parlous condition Lister found it in.

Other Battles Along The Way

Since 1992, Lister has invested much of its surplus in various enhancements and environmental improvements, to provide a high quality safe environment for its community. Along this path, we managed to save enough to pay off all our loans, and we own all the properties outright, with the help, of course, of that original Government grant-aid to acquire and improve the properties.

In the early 2000s, the RIE moved to its new location at Little France and the whole old RIE site was sold to developers, who named it the Quartermile site. Lister founded a vociferous ‘Save-Our-Sunlight’ campaign to stop them building huge monolithic office blocks right up beside the New Site flats and our back green there.

We managed to persuade the Council to reject the original plans and the developers revised them considerably to give better light and space for our residents. Once again collective endeavour, sustained pressure and assistance from sympathetic advisers and experts (including a daylight specialist) helped Lister residents to maintain their quality environment. 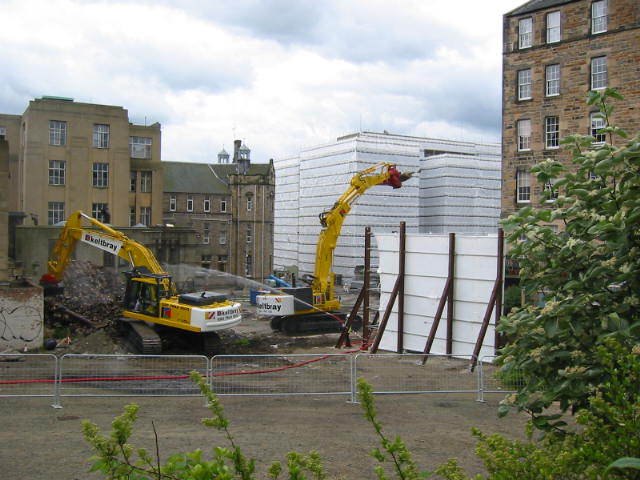 The demolition of the old RIE, showing Lister’s Lauriston Terrace flats on the right. The new Quartermile One office block now sits on the left side of this photo. 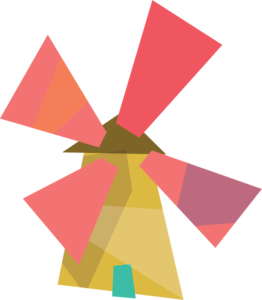